Median house prices continue to increase in all areas

Bindi Norwell, CEO of REINZ reported “Sales activity has picked up significantly in Auckland with a 41.6% increase in sales, the highest February sales count in 5 years. Interestingly, Auckland’s price growth has been more central rather than at Auckland’s extremities, Rodney and Franklin, were the only 2 districts to see year-on-year drops of -0.6% and -2.3% respectively. The REINZ House Price Index recorded 3,035, the first time it crossed the 3,000 mark.”

Bindi continued “There has been a lot of positive activity and high energy with properties selling ahead of the set sale date and interest at auctions increasing. The increase in the number of new listings (+5.8% year-on-year) has also likely contributed to the increase in activity.

Towards the end of February there has been some apprehension around COVID-19 which has likely been the cause of a few instances of reduced numbers at open homes. Looking forward over the next few months, if we see a further reduction in the OCR by the Reserve Bank, this may encourage more investors into the market.” 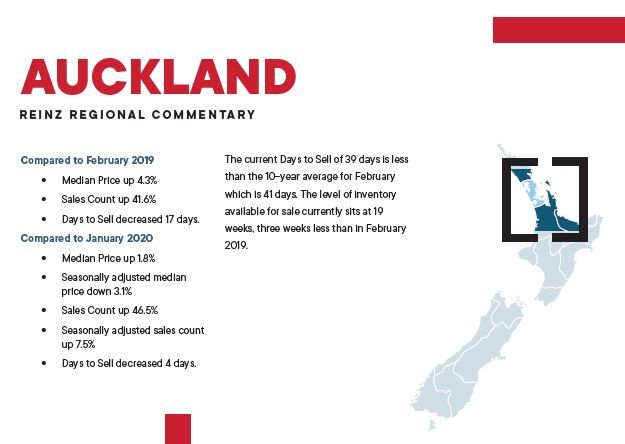